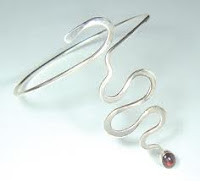 Armlet sterling silver body jewelry arm bracelet, also known as an arm ring or an armband, is a band of metal, usually a precious metal, worn as an ornament around the biceps of the upper arm. The arm ring is similar to a bracelet or bangle, though it must be shaped and sized to fit snugly to the upper arm.Historically, the arm ring was commonly worn by men, and often a ring in bronze age heroic literature would refer to an arm ring, rather than a finger ring, however, in Celtic iron-age literature, "ring" would also refer to a torc. Armlet are commonly known as bajuband in India. They are worn on the upper arm, just above the elbow. The wearers of the bajuband are considered wealthy, as it is a symbol of prosperity. Bajubands also help modestly cover bare arms of a woman. In India, like the moon, silver is considered to possess the alchemical properties of coolness against that of heat generated by gold.

Arm Bracelet or Armlet: A personal ornament for the Arm or wrist, made of different materials, according to the fashion of the age. Armlet - arm'-let: The word translated "bracelet" "armlet," or "arm-band," worn on the upper arm. But it is the same word which with a different context is rendered "ankle-chains". Armlet is an ornamental band worn on the arm, a bracelet worn high on the arm, rather than on the wrist.
Posted by Unknown at 2:01:00 AM