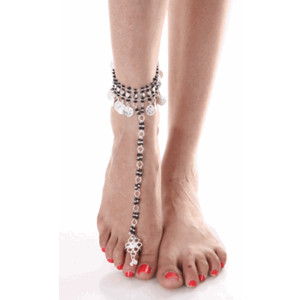 Silver anklets and toe ring go well with any casual dress for women, occidental or oriental. Traditionally, the wearing of an anklet is an important Indian custom used to express marital status and integral to wedding garments. Today, the anklet has evolved into stylish statements that can be worn by anyone. They are particularly suited for summers when women love to wear sandals. The feet of an Indian woman are very often adorned with anklets and toe rings. Anklets are of two basic types, i.e. the stiff and the flexible. The stiff anklets are either cast or fabricated by hammering sheet metal into the requisite shape. Using the techniques of chiseling, engraving, repousse, granulation, or threading and wire work, anklets are patterned. The flexible variety employs close interlocking of separately made links tied together either by using variations of chain technique or by threading together of links. Known as Jhanjhar or Paijeb, the flexible variety is often further adorned with jingle bells.

It has been said that there is no better music to a lover's ears than the seductive sound coming from the steps being taken by his beloved. This beautiful sound has been a constant subject in Indian poetry for several centuries now. 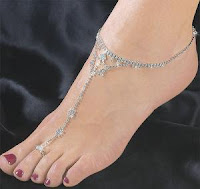 In Sanskrit, the anklet is known as "Nupura" etymologically the word "Nupura" is connected to 'Antah Pura', the female apartments in a palace, which in the ancient times was a mysterious place, holding within itself the promise of a thousand pleasures. Indeed poets imagined that with her every step, the heroine's tinkling anklets or payal beckoned her lover.

The charm of the heroine's rhythmic swinging of her body and wavy skirt is enhanced by the jingling sounds of the anklets. These sounds inspired Indian poets to describe the motion of an Adakara, the heroine in romantic Indian literature, as bewitching and seductive. The association is that she has bedecked herself with the most wonderful jewelry in anticipation of a rendezvous with her lover in a secluded grove. 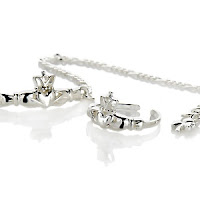 Classical Indian dance too is not untouched by the allure of the anklet. In most Indian dances, rhythmic footwork is one of the most important elements, in combination with gestures of the arms, hands, and eye movements. The various classical texts on dance, such as the Natyashastra, provide elaborate details on the positioning of the foot and its contact with the ground, the toe and ball of the foot touching the ground or only the heels or big toe doing so. The rhythmic stamping of the foot in its various positions generates forth a rich variety of charming harmonies from the anklet, contributing not a little to the overall dance performance, suggesting subtle erotic undertones. Music of the ankle bells is often how the ancients described it.

But in Indian Terminology, golden anklets are forbidden. This is because gold symbolizes Lakshmi, the Goddess of wealth, and it is not considered auspicious to wear it on one's feet. That is why in India anklets are mainly handcrafted in silver & gemstones only.

Finally on the feet are worn toe rings. Often these may be attached to the payal itself, with chains linking them.
Posted by Unknown at 2:42:00 AM