A sundress is an informal sleeveless dress of any shape in a lightweight fabric, for summer wear. The dress is intended to be worn without a layering top, and the design must therefore cut a balance between modesty and allowing sun exposure. 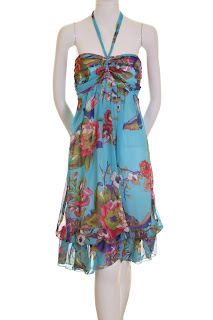 The sundress provides a feminine look that may be lighter and more comfortable than a skirt and blouse, or another sort of dress. Modern styles commonly feature very low necklines and short hemlines, but more modest lengths and a variety of patterns are also widely available.
Posted by Unknown at 6:57:00 AM No comments: Links to this post 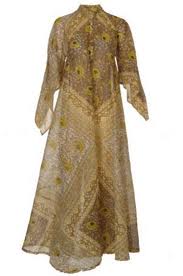 In the Ottoman Empire of the 16th century, Caftans of varying lengths were constructed from rich Ottoman satins and velvets of silk and metallic threads were worn by courtiers to indicate status, preserved in court treasuries, used as tribute, and given as "robes of honor" to visiting ambassadors, heads of state, important government officials, and master artisans working for the Imperial court.

Men's caftans often had gores added, causing the caftan to flare at the bottom, while women's garments were more closely fitted. Women were more likely to add sashes or belts. A sultan and his courtiers might layer two or three caftans with varying length sleeves for ceremonial functions. An inner short-sleeved caftan, was usually secured with an embroidered sash or jeweled belt, while the outer caftan could have slits at the shoulder through which the wearer's arms were thrust to display the sleeves (sometimes with detachable expansions) of the inner caftan to show off the contrasting fabrics of the garments. Historically, the kaftan is a mans cotton or silk cloak buttoned down the front, with full sleeves, reaching to the ankles. It was the traditional wear in the Eastern Mediterranean.The caftan may also be worn by women in the US, where it is typically called a muumuu.

It is again, usually not belted and may come in a variety of prints. Some are Hawaiian inspired, and others may have prints that are reminiscent of African designs. The caftan in the US may be cotton, cotton/polyester, or cotton gauze. It is usually worn as a house dress, a nightgown or a swimsuit cover-up, and can be extremely comfortable.
Posted by Unknown at 2:01:00 AM No comments: Links to this post